Wi-Fi on a Boat

Contributions and corrections are encouraged and appreciated, but please first visit our Community Portal for Important Policies on Content, Style, What we are, What we aren't, and answers to your questions.

In locations where shore-based Wi-Fi signals are strong, using them for Internet access on a boat is comparable to using Wi-Fi hotspots on land. However, the marine environment tends to exacerbate general Wi-Fi problems and create other problems of its own:

While it may seem that higher power Wi-Fi might help to improve your range, that's not necessarily true, since higher power only helps on transmit, not receive. Thus it's only likely to help if the other end of your connection is using higher power as well, which may not often be the case. In other words, what you may well wind up with is an alligator, big mouth but small ears. Also, unnecessarily high transmit power will tend to increase your interference with other Wi-Fi users, making you a bad neighbor. However, if the other end does have a powerful transmitter, at least you can have the same matching power level at your end. Improving your antenna will help both transmit and receive.

Usually the best way to improve range is to use a better antenna (or reflector with a standard antenna), which helps both transmit and receive.

Better antennas work by being directional:

The improvement in antenna performance is referred to as gain, where a higher number indicates the amount of performance improvement expressed in dBi. It takes an increase of 6 dBi to double range; e.g., as compared to a typical 2 dBi antenna, an 8 dBi antenna has double the range.

However, a highly directional antenna can be problematic on a boat, since it must be kept aimed accurately at the remote end of the connection, which can be difficult on a boat floating in the water (even when tied up). The width (angle) of the directional pattern (both vertically and horizontally) can be used to see how accurately the antenna must be aimed.

The simplest and easiest improvement is to use a higher-gain omnidirectional antenna (4-8 dBi), thereby avoiding the need to aim the antenna horizontally (point it at the shore-based wireless access point). Such an antenna works by concentrating energy/sensitivity in the horizontal direction that would otherwise be wasted vertically (up and down). Beyond about 8 dBi the vertical beam angle becomes so narrow that vertical aiming can be problematic on a boat:

There is a fair amount of discussion here about beam width and why a boat must have an omni antenna with about 8 dBi or less gain. Let us do a practical test of this. Take your hand bearing compass out and site a location about 1000 feet from your boat. Then slowly turn six degrees and look at that point. Now imagine that distance turned vertically and that is the beam with of an omni antenna with a beam with of 6 degrees at 1000 feet. Repeat this for a point 2000 feet away, then 3000 feet away, then 6000 feet away. This test convinced me to experiment with high gain omni antennas from the practical perspective of a sailing boat. I am not disagreeing that at close proximity that a lower gain antenna is better. But as the distance increases the effective beam width increases. Years of actual experience aboard sailing boats confirms that higher dBi gain omni antennas work well on a boat at anchor as well as at a dock close to the shore side station. However, there is a limit. In the United States, the Federal Communications Commission (FCC) regulates the use of antennas through FCC Part 15.247, which defines power limitations for Wi-Fi devices. The key to applying these rules is to understand EIRP (Equivalent Isotropically Radiated Power), which represents the total effective transmit power of the radio, including gains that the antenna provides (and losses from the antenna cable). For antennas with gain greater than 6dBi, the FCC requires you to reduce the transmitter output power if the EIRP is already at the maximum of 36dBm (4W). This means that as antenna gain goes up, you must decrease the transmitter power. Higher gain antennas would mostly apply to point-to-point solutions having very long range requirements, which is not used for multipoint Wi-Fi hotspot access applications (point-to-multipoint). When using omni-directional antennas less than 6dBi gain, the FCC rules require EIRP to be limited to 1W EIRP or less.

Higher antenna locations tend to have less interference from obstructions (e.g., biminis, dodgers, booms, and other very close proximity boats) than lower locations since there are more obstructions on a boat closer to deck level, so in general, it's a good idea to locate the antenna as high as is practical. WiFi is line of sight, and the use of a medium gain antenna (4dBi-9dBi) will provide a fair amount of flexibility in accessing WiFi access points on shore regardless of the height of the antenna on the boat due to it's wide cone of transmission. Use of a higher gain antenna (12dBi - 15dBI) may cause you to have a need to adjust the height of your antenna based on the access point location since the cone of transmission is significantly smaller than on medium gain antennas. Height is important to get clear of nearby obstacles and for maximum range. VHF antennas are mounted at masthead for the same reasons.

There are products than can be used to keep a directional antenna aimed at an access point as a boat swings or drifts with precision of better than one degree (e.g., Track-It-TV). However, they are relatively expensive, and they only track in the horizontal plane, so it's important that the vertical beam width take into account rolling and pitching of the boat. Usually a vertical beam angle of 10 degrees or so is adequate for all but the roughest conditions, but even beam angles of 20 degrees or more can still result in substantial improvement in gain over an omnidirectional antenna.

There are hobby projects to build an auto-aiming directional antenna capable of staying locked into the best signal while a boat rotates around an anchor line.

Setup as needed, packed away when not in use. Ideally the radio unit and antenna are located together as high as possible (e.g., outside on the top of the cabin), usually connected by cable:

There are a new set of solutions that are coming to the market that combine the benefits of both USB and Ethernet based systems into an extremely easy to use package and provide a full onboard network for your boat as well as give you long range connectivity to shore-side access points.

Lightning/Surge Protection: This may protect your investment although lightning suppressors may cost as much as the Wi-Fi equipment itself.

Any permanent mount solution mounted above deck level will give far more range and signal quality than regular Wi-Fi at deck or cabin level.

When using a wireless Ethernet [client] bridge, IP addresses of networked clients on the boat (wired or wireless) are normally assigned by a shore-based DHCP server.

Possible solutions to this problem: 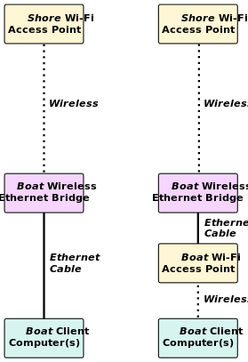 Note: In order to maximize throughput, a private boat Wi-Fi access point should ideally be on a different minimally-overlapping channel (1, 6, 11 in the USA) from the shore access point.

Many standalone low-end networking devices that use separate "wall wart" type power supplies are able to tolerate a relatively wide range of input voltage, and can be run directly from 12 VDC boat power with an appropriate adapter cable. Check manufacturer input voltage specs if possible.

One advantage of the Ubiquiti systems (the Bullet 2HP or the Nanostation 2HP) is that they run on power over ethernet which can be "injected" using a passive PoE injector (like $5) wired straight into 12VDC. Getting an injector with separate power and lan leds is a good idea, since you can figure out the polarity without having your device plugged in.

When some boats are too distant from a shore access point for a direct Wi-Fi connection, it may be possible to setup nearer boats to repeat or relay the Wi-Fi signal to more distant boats. See Wireless Distribution System.

Wi-Fi channels are standardized, but vary slightly in different parts of the world. Many Wi-Fi devices will work properly anywhere in the world, either by means of a configuration option (preferable), or by means of different firmware loads (clumsy). See Wi-Fi Channels. Check whether a suppliers has included a simple method to conform to the Wi-Fi requirements of different countries. For example: The Wirie AP+ and Bitstorm Bad Boy Xtreme N and Xtreme MJ provide this as part of their management application and configures it to operate within the legal requirements for the selected country.

Community content is available under CC-BY-SA unless otherwise noted.
Advertisement